Enrolling in the Peak Acting Studios with Christine Reed is a unique opportunity. She not only has a true understanding of the entertainment industry as a talent agent and an acting coach, but also has the experience of being the mother of a professional actor. She provides her students with the necessary tools to guide them thru their acting careers. She will also provide much needed guidance to the parents of children who want to have acting careers".

When my daughter was invited to try an acting class I expected the same reaction from her that I get with many new activities. I usually ask "How was it?" and in return I get an empty "good...." But not that night! She was very excited and persistent about when she could continue! Whoa! She detailed the conversation with everything she loved about the class. She was astonished to see what she acted like on video the first time. The use of video equipment is such a great tool. Christine is warm and inviting, not at all like a stage fright acting class we expected. My daughter comes away from each class with a sense of accomplishment and the feeling of progressing toward her own goal. The best part is her attitude toward constructive criticism. Christine knows how to make the kids want to do better. Its pretty awesome to see your child come out of the session smiling!

Such a good teacher! Peak Acting Studios is an amazing school. I recommend to many.

Christine was a wonderful teacher. My son truly enjoys working with Christine and really flourished in her class. As a parent who has been there, she was able to give much needed advice when it came to auditions and what to expect".

Peak Acting Studios has been such a wonderful opportunity for my daughter. She has learned so much, and it has opened up a world of opportunities that she would have otherwise missed. Christine is such an excellent teacher and my daughter can not wait until the next class each week. You can't find another experience that combines the interworking of acting for film and a fun atmosphere each week. One of a kind, and a wonderful addition to Colorado's acting world.

Both my boys enjoyed this class very much and got a lot out of it.  The teacher is very respectful of the fact that they are children and chooses age-appropriate material and activities.  She also is very communicative with the parents and shares a lot of knowledge about the business of acting and how to avoid being taken advantage of by the many scammers that are out there.

I love that Peak Acting Studios gets to know each student personally and Christine has made acting so much fun for my boys!!!

Peak Acting Studios and Christine Reed create the perfect environment to help actors and actress of all ages grow and fine tune their acting skills. Their professionalism is beyond measure. They truly care about their students. My daughter has gained more confidence in front of the camera in just the few months she has been attending her classes. I cannot praise them enough for what they have done for my daughter. “Talent” is not just part of their name, it is truly their passion.

Peak Acting Studios is a safe, friendly and fun environment for kid’s wanting to break into acting, or even simply just want to break out of their shell. Christine does a fabulous job of making the kids feel comfortable in front of the camera, and acting out scenes in front of others. My son can’t wait to go to his acting class every week, he literally counts down the minutes. If you’re looking for an affordable, fun, and comprehensive acting program for your child, I would highly recommend Peak Acting Studios.

I appreciate everything! Christine is great at saying things in a nice way but critiquing at the same time. I like her bluntness. I already learned more in 5 classes with her then 4 months at the other acting school I attended. I thought she was spot on with her portrayal of my strengths and weaknesses.

We absolutely adore Christine!  She really has a great way of bringing out the kids’ personality & my daughter always has a blast in her class!  She makes this a fun & rewarding experience for everyone involved.  Christine is a constant source of excellent information for us & we value her input greatly.

We have been with Christine since my daughter decided to be part of the acting community a few years ago. Her personality with the kids is amazing. Christine makes her classes fun and is able to hold the attention of these kids. We could not of asked for a better acting coach. Peak Acting Studios and Christine are an amazing addition to the Denver area.

"We joined Peak Acting Studios in July and were almost immediately pulled into the Advanced Program. Being completely new to the acting thing I was a little (or a lot) skittish.  Really, auditions (agent read, so I have learned)...in Hollywood?  Had scam written all over it. After doing some homework (yep, I'm a background checking kind of gal) and praying (a lot) we moved forward simply hoping for a good experience. What I got was a 14 year old girl who transformed from a sheepish, insecure child to a confident actress.  As a bonus she received two viable contract offers with legit working agents.  (Next stop, pilot season in LA - seriously!) While there's no guarantee as to what the future will hold, it's been a fun (and at times stressful) adventure thus far... And it's just beginning. Thank you Christine for being (and continuing to be) a fantastic  advocate, resource and teacher. Thank you for impacting my daughter in such a meaningful, life-changing, way.  Finally, thank you for believing in her and, most importantly, getting her to believe in herself".

"After searching the Denver area for a long time looking for film training for teens, I finally found Peak Acting Studios and Christine Reed!

My daughter and I instantly liked her. After three months in the program, my daughter went to L.A. for a Agent meeting. Everything went without a hitch thanks to Christine's great organization! My daughter loved it and it was a wonderful opportunity for her to finally meet "real" agents. She even got signed with an agency. Thank you again, Christine, very much for this great and rare opportunity!"

Christine is great. She is energetic and nurturing. My 10-year-old son got representation in LA after doing the 8 week program. I just wish Christine was still in LA! 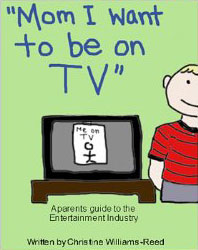 Now you can read my book free on Amazon! Being the mother of a working actor and a former Los Angeles talent agent I wrote this book to help guide young actors and their parents, helping you to avoid the (sometimes costly) mistakes many new actors make. It was written from both a parents and a talent agents point of view. Perusing a career in the entertainment industry can be tricky and this book will help you get started, it offers valuable advice that will give you the foundation you need to start your child's career on the right path.